The U.S. bison industry is trying to draw more ranchers to where the buffalo roam.

After collapsing in 2002, demand for bison burgers and steaks from retailers such as Whole Foods Market Inc., Wal-Mart Stores Inc. and Kroger Co. is rising, sending processors and marketers on a recruiting drive to round up more producers to raise the hulking creatures.

One major hurdle to recruiting ranchers: convincing them to handle animals that can grow to the size of a Mini Cooper, and sometimes get ornery.

“That’s like sticking bobcats in gunnysacks,” said Lee Graese, a former bodybuilder who raises bison with his wife, Mary, a dietitian, near Rice Lake, Wis. “If you can run into it at 35 miles per hour with your pickup and it’s still standing, you’ve got a pen that’ll hold a bison.”

Bison-meat sales topped $340 million last year, according to data from the National Bison Association. This is a tiny fraction of the more than $100 billion in sales of cattle, hogs and poultry produced in the U.S. in 2015. But bison producers say their meat boasts an edge in the marketplace as consumers seek out more naturally raised protein, and sales have grown by 22% over the past five years. Fans say it tastes like beef, but leaner and slightly sweeter. 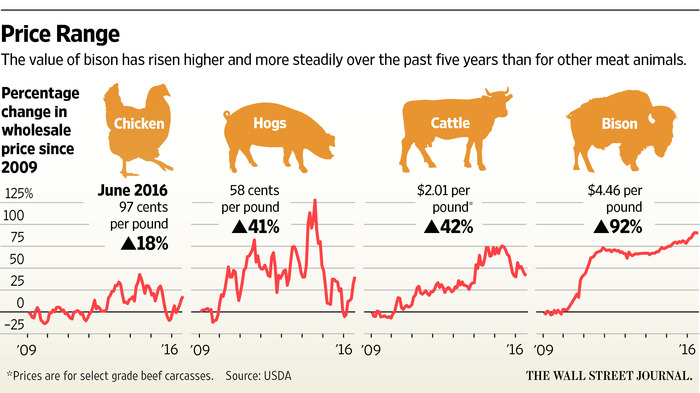 Retailers like Whole Foods are getting their bison-meat orders filled, but Theo Weening, the company’s global meat buyer, said he could sell a lot more. “I’d love to do a feature on ground buffalo or seasoned buffalo burgers, but if the supply is not there, we can’t feature it,” he said.

Wholesale bison-meat prices, currently around $4.50 a pound, have trod reliably higher, nearly doubling from January 2009 through June of this year. That outpaces a 42% increase for similar beef grades, a 41% rise in pork and an 18% gain for broiler chicken, according to U.S. Department of Agriculture data.

Dave Carter, executive director of the Westminster, Colo.-based Bison Association, says the industry needs commercial-scale ranches like the beef industry has, capable of raising thousands more bison to further build the market. Cattlemen, he said, are natural candidates, beleaguered by a 20% decline in cattle-carcass prices since early 2015.

In the often-punishing meat business, where ranchers and meatpackers contend with whipsawing prices and shifting consumer tastes, shaggy bison have other attractions.

They are hardy, built to survive blizzards, happy to munch grass. Their meat is high in protein and produced without growth-promoting medications and hormones that have fallen out of favor with some meat eaters.

To clear ranchers’ path to buffalo country, the Bison Association, a trade group, successfully lobbied the USDA for programs that help bison ranchers get disaster relief funds, and offset the cost of fencing. The May designation of the American bison as the U.S. national mammal was a recent coup. (The bald eagle remains the U.S. national animal.)

There are signs the rancher drive is working. The Bison Association’s number of active producers has climbed by nearly a quarter to about 850 from 2010 to 2016, and about a fifth of attendees at the group’s recent winter conferences are first-timers, Mr. Carter said.

The group also drafted a 300-page guide to managing the animals and the industry. Advice includes “build a good fence,” though “’Jurassic Park’ corrals” aren’t needed if a rancher forges a bond with the beasts. “Spend some time thinking about what we do with our bison and how it may look or feel from their perspective,” the manual counsels.

Randy Miller, a former hair-salon magnate who left that business to raise about 1,000 bison across two ranches in Nebraska and Missouri with his wife, Jane, erred when he lugged a bucket past a female bison named “Muddy.” She assumed it contained feed and exuberantly charged. Mr. Miller leapt into a hay bin, and now tells people it was his own fault.

The bison industry has had its own close calls. A surge of speculative investment into bison in the late 1990s, driven partly by troubles in the cattle business, pushed the price of animals to several thousand dollars a head.

But the nascent bison-meat market struggled to soak up the meat, and a drought scorched grazing lands and forced ranchers to slaughter more animals. That created a glut that by 2002 had plunged prices below $300 a head and drove many ranchers from the business.

Now, many in the bison business call the collapse a blessing. Bison meat previously had struggled to tempt diners because of its high price, but it became a bargain for retailers and restaurants as bison flooded processors like Rocky Mountain Natural Meats, a Henderson, Colo.-based company that ranks as the largest U.S. processor of bison meat.

“Some of those customers are still buying bison today at three to four times the price it was then, because they figured out it was a good product,” said Bob Dineen, chief executive of Rocky Mountain. The company supplies bison steaks, burgers and pot-roast to Whole Foods, Costco Wholesale Corp. and Wal-Mart, which this year began carrying Mr. Dineen’s in about 500 stores.